The third unit of the Kakrapar Atomic Power Project (KAPP-3) in Gujarat achieved its ‘first criticality’ — a term that signifies the initiation of a controlled but sustained nuclear fission reaction — at 9.36 am on Wednesday. PM Narendra Modi congratulated India’s nuclear scientists on this achievement, describing the development of the indigenous reactor as “a shining example of Make in India” and a “trailblazer for many such future achievements”.

Why is this achievement significant?

This is a landmark event in India’s domestic civilian nuclear programme given that KAPP-3 is the country’s first 700 MWe (megawatt electric) unit, and the biggest indigenously developed variant of the Pressurised Heavy Water Reactor (PHWR).

The PHWRs, which use natural uranium as fuel and heavy water as moderator, are the mainstay of India’s nuclear reactor fleet. Until now, the biggest reactor size of indigenous design was the 540 MWe PHWR, two of which have been deployed in Tarapur, Maharashtra

The operationalisation of India’s first 700MWe reactor marks a significant scale-up in technology, both in terms of optimisation of its PHWR design — the new 700MWe unit addresses the issue of excess thermal margins — and an improvement in the economies of scale, without significant changes to the design of the 540 MWe reactor. (‘Thermal margin’ refers to the extent to which the operating temperature of the reactor is below its maximum operating temperature.)

Four units of the 700MWe reactor are currently being built at Kakrapar (KAPP-3 and 4) and Rawatbhata (RAPS-7 and 8). The 700MWe reactors will be the backbone of a new fleet of 12 reactors to which the government accorded administrative approval and financial sanction in 2017, and which are to be set up in fleet mode. 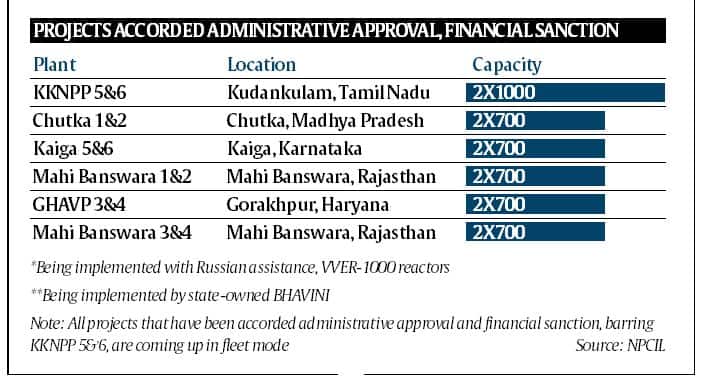 When did work start on this 700 MWe project?

The first “pour of concrete” happened in November 2010, and this unit was originally expected to be commissioned in 2015.

State-owned Nuclear Power Corporation of India Ltd (NPCIL) had awarded the reactor-building contract for both KAPP-3 and 4 to Larsen & Toubro at an original contract value of Rs 844 crore. The original cost of two 700 MWe units was pegged at Rs 11,500 crore, and the tariff per unit was originally calculated to be Rs 2.80 per unit (kWh) at 2010 prices (a cost of roughly Rs 8 crore per MWe). This costing is expected to have seen some escalation.

The capital investment for these projects is being funded with a debt-to-equity ratio of 70:30, with the equity part being funded from internal resources and through budgetary support.

What does achieving criticality mean?

Reactors are the heart of an atomic power plant, where a controlled nuclear fission reaction takes place that produces heat, which is used to generate steam that then spins a turbine to create electricity. Fission is a process in which the nucleus of an atom splits into two or more smaller nuclei, and usually some byproduct particles. When the nucleus splits, the kinetic energy of the fission fragments is transferred to other atoms in the fuel as heat energy, which is eventually used to produce steam to drive the turbines. For every fission event, if at least one of the emitted neutrons on average causes another fission, a self-sustaining chain reaction will take place. A nuclear reactor achieves criticality when each fission event releases a sufficient number of neutrons to sustain an ongoing series of reactions.