International remittances in 2018 reached $689 billion, out of which India received $78.6 billion from the 17.5 million living abroad.

The Global Migration Report 2020, newly released by the UN-affiliated International Organization for Migration (IOM) reiterates the key trend of the International Migrant Stock 2019 dataset released by the UN Population Division in September — of the 272 international migrants worldwide (3.5% of the global population), India accounts for the highest share with 17.5 million Indians living outside the country

India is followed by Mexico (11.8 million) and China (10.7 million). According to the IOM report, roughly two-thirds of international migrants are labour migrants. Among other details in the new report, the high count of international migrants living abroad also makes India the leading recipient of remittances. 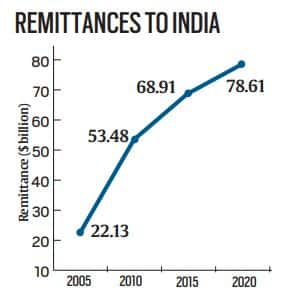 The top migration corridors for Indians are the United Arab Emirates, the US and Saudi Arabia. Conversely, the highest number of migrants entering India come from Bangladesh. The US is also the top choice for migrants from China. 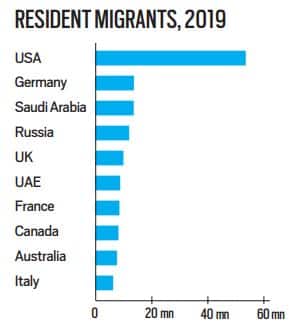