Materials eroded & transported by winds must come to rest somewhere.

The finest dust travels enormous distances in the air sometimes as long as 2300 miles before they settle down.

The dust from Sahara desert is sometimes blown across the Mediterranean to fall as blood rains in Italy or on the glaciers of Switzerland.

As wind borne materials are shifted according to their coarseness, it can be expected that the coarser sands will be too heavy to be blown out of desert limits.

They remain as dunes or other depositional landforms within desert themselves.

Hills of sand formed by the accumulation of sand & shaped by the movement of winds, a striking characteristic of erg or sandy desert

Can be classified as active or live dunes, constantly on move or inactive fixed dunes, rooted with vegetation

Two most common types of dunes are Barchan & Seifs

Crescent or moon shaped live dunes which advance steadily in the particular direction of prevailing winds.

Initiated probably by a chance accumulation of sand across an obstacle, such as patch of grass or a heap of rocks

They occur transversely to the wind, so that their horns thin out & become lower in the direction of the wind

Mainly due to reduced frictional retardation of the winds around the edges. 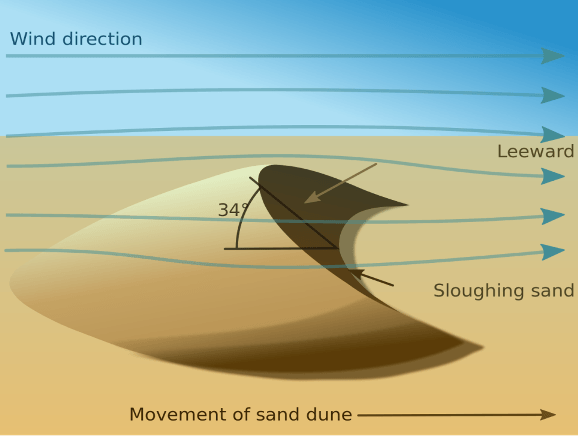 The windward side is convex & gently sloping whiles the leeward side, being sheltered, is concave & steep.

The crest of sand dunes moves forward as more sand is accumulated by the prevailing wind. 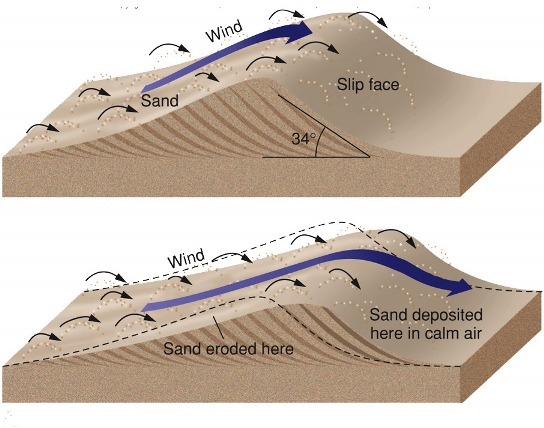 The migration of Barchans may be a threat to desert life as they may encroach on an oasis burying palm trees & houses.

Long rooted sand holding trees & grasses are therefore planted to halt the advancement of the dunes to prevent areas of fertile land from being devastated.

Long narrow ridges of sand, often over a hundred miles long, lying parallel to the direction of the prevailing winds, with their crustline rises & falls in alternate peaks & saddles in regular successions.

Dominant wind blows straight along the corridor between the lines of the dunes so that they are swept clear of sand & remain smooth.

The eddies that are setup in corridors, blow towards the side of the corridor & drops the sand to form the dune.

In this manner, prevailing winds increases the length of the dunes into tapering linear ridges while occasional cross winds tends to increase their heights & width.