Thiourea is the sulfur analog of urea. Thiourea is used for its synthetic equivalence to hydrogen sulfide. It plays an important role in the construction of heterocycles. It appears as whitecrystals which is combustible and on contact with fire gives off irritating or toxic fumes. It acts as a precursor to sulphide to produce metal sulphides like mercury sulphide.

Thiourea reacts with alkyl halides gives isothiouronium salt on further hydrolysis reaction of this salt results in the formation of thiol and urea. 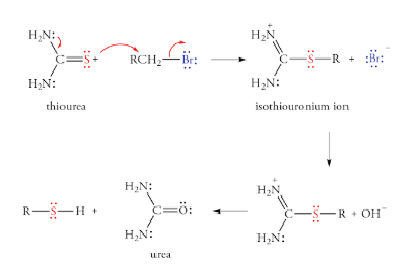 It is used in industries for the production of flame retardant resins and vulcanisation accelerators.

Used as a chemical chemical intermediate or catalyst in metal processing and plating and in photo processing.

Used as a contaminant in the ethylene bisdithiocarbanate fungicides and can also be formed when food containing the fungicides is cooked.

What is thiourea used for?

Thiourea’s industrial uses include the manufacture of flame retardant resins, and accelerators for vulcanization. Thiourea is used in diazo paper as an auxiliary agent (light-sensitive photocopy paper) and almost every other form of copy paper. This is also used to color the photographic prints in silver-gelatin.

Is thiourea a reducing agent?

Thiourea dioxide, a thiourea oxidizing substance, is a reduction agent that is stable in both solid form and cold aqueous solution. It has a mild acidic reaction, and only acquires maximum reduction capacity when heated to approximately 100 ° C in aqueous solution.

Which functional group is present in urea?

Is urea acidic or basic?

It is neither acidic, nor alkaline when urea dissolves in water. This is used by the body in many ways, most importantly for excretion of nitrogen. In the urea cycle the liver shapes it by mixing two ammonia molecules (NH3) with a molecule of carbon dioxide (CO2).

What type of inhibitor is thiourea?