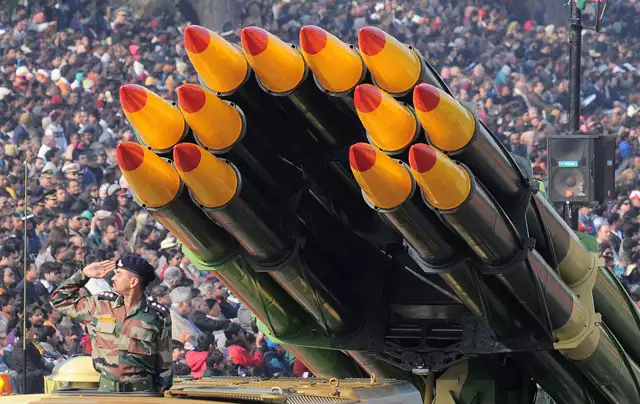 Pinaka is an indigenous multi-barrel rocket launch system, which has been developed by the Defence Research and Development Organisation (DRDO) for the Indian Army.

Its weapon system has a state-of-the-art guidance kit bolstered by an advanced navigation and control system.

The Pinaka Mark II Rocket is modified as a missile by integrating with the navigation, control and guidance system to improve the accuracy and enhance the range.

The navigation system of the missile is aided by the Indian Regional Navigation Satellite System (IRNSS).

It is an artillery missile system capable of striking into enemy territory up to a range of 75 kilometres with high precision.

The initial version of weapon system was called Mark I, which had a range of 40 km. The upgraded version or Pinaka Mark II has an extended range of 70 to 80 km.

The mission achieved all the objectives including enhancing the range, accuracy and sub-system functionality.

It is used for attacking the adversary targets prior to the close-quarter battles which involve smaller range artillery, armoured elements and the infantry.

The development of the Pinaka was started by the DRDO in the late 1980s, as an alternative to the multi-barrel rocket launching systems of Russian make, called like the ‘Grad’, which are still in use.

After successful tests of Pinaka Mark-1 in late 1990, it was first used in the battlefield during the Kargil War of 1999, quite successfully.

Subsequently, multiple regiments of the system came up over the 2000s.

Its versions and capabilities

The Pinaka, which is primarily a multi-barrel rocket system (MBRL) system, can fire a salvo of 12 rockets over a period of 44 seconds.

One battery of the Pinaka system consists of six launch vehicles, accompanied by the loader systems, radar and links with network-based systems and a command post.

The Mark-I version of Pinaka has a range of around 40 kilometres and the Mark-II version can fire up to 75 kilometres.

The Mark-II version of the rocket has been modified as a guided missile system by integrating it with the navigation, control and guidance system to improve the end accuracy and increase the range.

The navigation system of the missile is linked with the Indian Regional Navigation Satellite System.