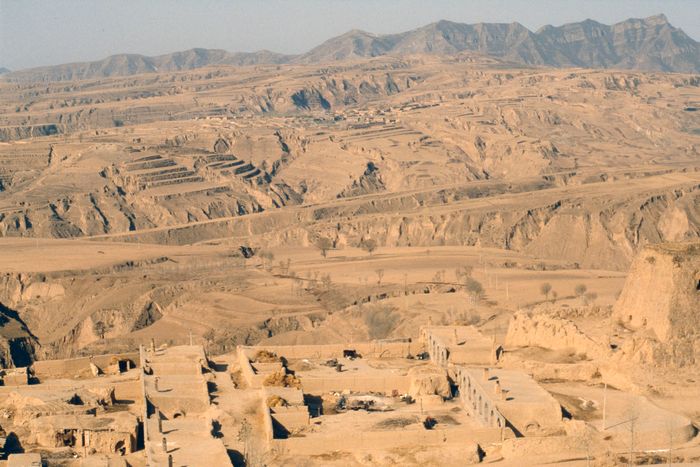 The fine dust blown beyond the desert limits is deposited on neighbouring lands as loess.
It is a yellow, friable (easily crumbled) material is usually very fertile.
Loess is in fact, fine loam, rich in lime, very coherent and extremely porous
Water sinks in readily so that the surface is always dry,
Streams may cut deep valleys through the thick mantle of soft loess to develop badland topography.
The most extensive deposits are found in north-west China in the loess plateau of the Hwang-Ho basin.

Loess Plateau, Chinese (Pinyin) Huangtu Gaoyuan or (Wade-Giles romanization) Huang-t’u Kao-yüan, highland area in north-central China, covering much of Shanxi, northern Henan, Shaanxi, and eastern Gansu provinces and the middle part of the Huang He (Yellow River) basin. Averaging about 4,000 feet (1,200 metres) in elevation and covering some 154,000 square miles (400,000 square km), it is the world’s largest loess plateau. The region is overlain by a mantle of fine-grained, wind-deposited, yellowish alluvium known as loess, which is also carried in suspension by the Huang He. The loess layers average 165–260 feet (50–80 metres) in thickness and mask the detailed relief of the underlying surfaces. The loess is highly subject to erosion because of sparse vegetation, heavy precipitation in summer, and gullying. The government has conducted programs to control erosion through afforestation and terracing on an extensive scale to permit better agricultural use of the land. Grain is the major crop on the plateau.