For the first time in its history, Kerala held a clean and green election in 2019. Early in March, the Kerala high court banned the use of flex and non-biodegradable materials during electioneering. The CEO of Kerala, Shri TR Meena IAS, issued an advisory immediately after asking all political parties to refrain from using single-use plastic materials in poll campaigning, and advising them to opt for eco-friendly options, prompting them to consider wall graffiti and paper posters as viable alternatives. The collaboration of Kerala Suchitwa Mission was sought for, accordingly by doing the handholding this joint venture was carried out successfully in the whole state.

Along with the district administration in the state capital, Thiruvananthapuram, the Haritha Keralam Mission and the Suchitwa Mission, two government bodies looking at waste management, took steps to ensure a green election.

The primary focus was to prevent the use of plastic and choosing reusable alternatives like glass/stainless steel/porcelain cutlery. The CEO and the Commission made it clear that banners and hoardings made of plastic material should be avoided. Instead it can be replaced by banners and hoardings made using paper and cotton cloth. Candidates were advised to try and avoid the use of plastic drinking water bottles during their campaigning and to use only eco-friendly items such as cloth and paper materials to decorate their campaign vehicles. The candidates and party workers were requested to hire steel plates and glasses for meals while campaigning.

Polling stations, counting centres, and other election offices had also been directed to avoid plastic material, including water bottles. And almost all districts created a green model polling booth as a norm to be followed, and it also was useful in spreading awareness amongst the public of the efforts taken at the commission’s level to ensure that we walked the talk.
And in an attempt to lead from the front the CEO created a booklet explaining all the ways in which the green protocol can be adhered to and enforced in the state. Not just that, all activities conducted by the Commission at the state level and even at the district level were entirely “green” events and promoted the plastic free message. 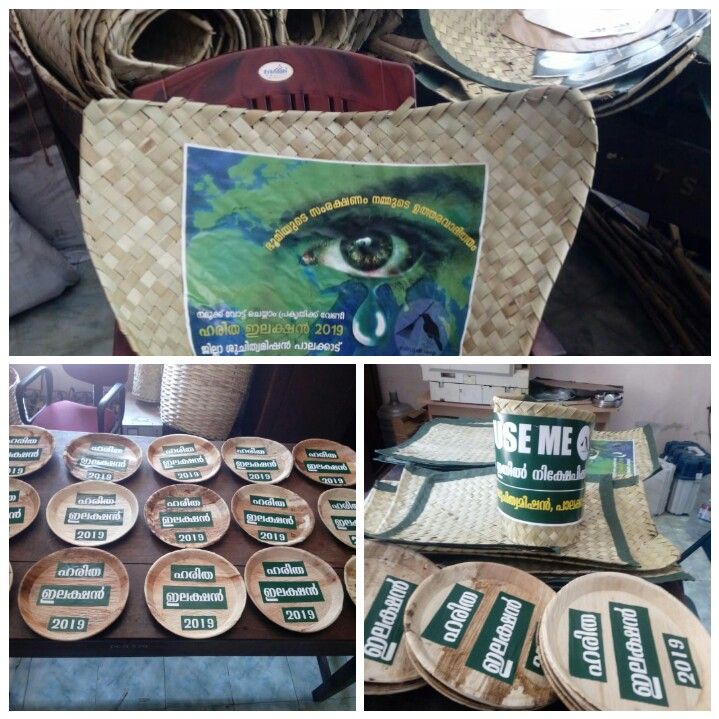 Special events were organized by the district election officials to promote the green message including cycle rallies, processions by students and green protocol volunteers in different districts, signature campaign on cloth banners, street play on green election, flash mobs, beach run, sand art, quizzes, celebrity endorsements and messages from district SVEEP icons to adhere to green protocol etc. all under the aegis of SVEEP activities in the state.

Not just that students from the Election Literacy Clubs (ELCs) created handmade paper pens and paper bags which was used to distribute polling materials to officials on polling day in various locations especially in Pathanamthitta and Alappuzha. Similarly at many Collectorates in the districts the candidate were welcomed with green materials when they came to file their nominations.

The public was also encouraged to come up and report any violations that was noticed anywhere in the state for immediate action from authorities. As part of the green protocol, more than 17 lakh flex boards, banners, posters and stickers have been removed after the model code of conduct came into force in Kerala and up until counting day in the state. Election officials were absolutely objective and impartial in their enforcement of the code throughout the state and this helped them in ensuring that any sort of defacement was immediately dealt with.

And while all political parties and candidates welcomed the move and took steps to adhere to the green protocol as much as possible, it was not 100% complete in the state this time. But this is the first step in the right direction and soon this will become the norm across the state.