The Chalukya dynasty was a Classical Indian royal dynasty that ruled large parts of southern and central India between the 6th and the 12th centuries. During this period, they ruled as three related yet individual dynasties. The earliest dynasty, known as the “Badami Chalukyas”, ruled from Vatapi (modern Badami) from the middle of the 6th century. The Badami Chalukyas began to assert their independence at the decline of the Kadamba kingdom of Banavasi and rapidly rose to prominence during the reign of Pulakeshin II. After the death of Pulakeshin II, the Eastern Chalukyas became an independent kingdom in the eastern Deccan. They ruled from Vengi until about the 11th century. In the western Deccan, the rise of the Rashtrakutas in the middle of the 8th century eclipsed the Chalukyas of Badami before being revived by their descendants, the Western Chalukyas, in the late 10th century. These Western Chalukyas ruled from Kalyani (modern Basavakalyan) until the end of the 12th century.

Extent of the Chalukya dynasty 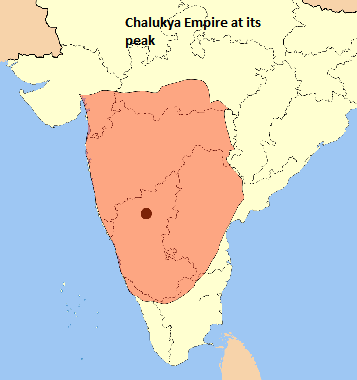 Jayasimha was the first ruler of the Chalukyas.